An eclectic mix of title-winning bikes covering four decades will be displayed at The Classic Dirt Bike Show sponsored by Hagon Shocks on February 11-12.

Representing the 1950s is Jeff Smith’s 1953 BSA Gold Star on which he won the 1955 Scottish Six Days Trial. The machine is very easily recognisable – the BSA factory competition department drilled hundreds of different sized holes in it, giving the bike its name: Smith’s Woodpecker Goldie. Jeff won the 1954 Victory Trial on this bike in a rigid format before changing to swinging arm mode in mid-1954, after which he won many trade-supported nationals in 1955.

The 1960s is represented by another famous BSA on which Scott Ellis, the Studley Midlands engineer, somewhat surprisingly won the 1965 British Experts Trial in one of the hardest ever UK trials events. Battered by snow and bitterly cold winds, Scott beat Sammy Miller by two points – 64 to 66 – in a winter Birmingham MCC thriller. Scott’s machine was highly modified, not having the usual engine cradle, having oil in the frame and a special light alloy cylinder. The cream of Britain’s trials riders had to play second fiddle to the 24-year-old who secured his triumph at the infamous and previously unconquered Bongham Alley sections in Wales. Tackling the bike’s reconstruction is the experienced Colin Dommett. It’s been stripped entirely since 1971 and will be displayed for the first time ever at next month’s show at Telford International Centre, which Colin and Scott both plan to attend. 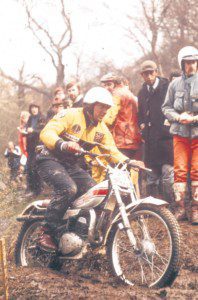 In the 1970s, ‘Magical’ Mick Andrews was truly the Monarch of the Glen, winning the Scottish Six Days on five occasions. French super-enthusiast, Olivier Barjon, will take Mick’s famous ‘cantilever’ 1974 Scottish winning Yamaha to the show. It was the first time that a cantilever or monoshock machine had won a major event. Mick hasn’t seen the bike for 39 years and will attend the show for a nostalgic look at his old steed, which has been impounded in the French Yamaha importer Sonauto’s headquarters for most of that time. Mick won the 1974 event, beating trials supremo Malcolm Rathmell into second place.

In the 1980s, Telford guest Dave Thorpe was the king, winning the Motocross World Title three times in 1984, 86 and 89. He also took eight British Championships and the World Veterans crown. All his world titles were on a Honda machine, and two of them are still in the UK so Dave hopes to secure the 1986 bike to display at the show. Dave’s first two titles were gained in dramatic fashion at the Wohlen circuit in Switzerland each time from Belgian superstar Andrew Malherbe. For the title chase in 1989, the much-missed Eric Geboers was forced to play second fiddle to the powerful Brit. Since retirement, Dave has secured major success as the UK team manager for the 1994 Motocross Nations, guiding the British team to its first success for decades. These days, Dave works in an ambassadorial/promotional role for Honda, while also running Honda’s off-road training at all levels. He also still finds time to run the Honda factory’s World Motocross team. Thorpe’s career highs and lows will be revealed to visitors as commentator John McCrink quizzes the motocross star when they take to the stage at Telford.

For further details about the Classic Dirt Bike Show sponsored by Hagon Shocks, and to save £2.50 on discounted advance tickets, please click here.

The Kempton bike shows have always played a host to some of the world’s most beautiful machines, and December 3 is no exception.

The Kempton bike shows have always played a host to some of the world’s most beautiful machines, and December 3 is no exception.